So welcome to the first post and start of the Scorpius Rift World Wide Narrative Campaign set in the 40k Universe.

The Basics: The Scorpius Rift World Wide Campaign is an Narrative Campaign, where players of mostly Rogue Trader (1st Ed), 2nd and 3rd Edition 40k players, Epic, Inquisitor and Inq28 take part in narrative based gaming at clubs and in homes across the globe. The battles and reports being reported on the Lords of War Facebook Group. The general missions and story being driven by my self the global GM or Games Master with occasional assistance from friends.

The idea is to develop a story ark that encompasses the actions and consequences of actions taken by players around the globe in their games and from the results of their battles.

This is entirely narrative and is up to players to choose how to interpret and or play the suggested games. Hopefully driving an engaging system spanning story of war, heroism, dramatic battles and the fall of great hero's.

The primary goal being to have a lot of FUN!!!

Rules Lawyers need not apply. Its time to dig out that old school gaming mentality and let the dice roll in the name of laughs, friendly gaming and the story.

The Story: The Scorpius Rift is a spacial anomaly at the heart of the Scorpius System. A system of 6 main planets and several moons that are situated within The Veiled Region, bordering Segmentum Tempestus. A system that until the recent and sudden abatement of number of giant warp storms. Had lain cut off from the Imperium of man and the rest of the galaxy since the dark ages. Simply existing on the oldest navigational maps as a dull black navigation warning marker, telling the wary to venture not.

Since the warp storms have abated. Many eyes, great minds and rogue traders  have turned their attention towards this far flung system. Some for the ripe plunder, some in search of lost colonies and some in the service of their gods!

Now begin the battles for control of the Scorpius Rift.

The Campaign: The campaign will start with the "arrival" of each of the main factions and forces involved in the story.
This will begin with an initial recruitment phase of several weeks to gather players, advertise and share the campaign around the world on various social media, forums and harness those players into choosing and then preparing their initial campaign forces.

In this period I aim to also enlist if I can the voluntary assistance of some individuals skilled in the preparing of relatively simple graphical maps and materials for the ongoing campaign.

The campaign will be run in a series of phases. These phases will roughly represent an approximate game time period of between 3months to 6months Terran standard as the time line progresses.

For each phase I intend to issue a bundle of starting materials for each faction. With suggested battle types and story related issues, missions, special character and possibly more. At the conclusion of each phase the outcomes and efforts of each faction as reported to me and posted on the Lords of War facebook group, will be summarised here on this blog for existing and any new players to review.
No definite dates are being set with the real world being the way it is, there will have to be a bit of flex in this from time to time, yet I anticipate keeping each phase open for about 3 months initially and will be subject to review as the players and participants get through their games and or badger me.

The Rules: Though I encourage folks to dig out and dust off their copies of Rogue Trader 40,000 or 2nd and 3rd edition 40k.. just because they had the old school fun and frolic factor before the world became all serious grim dark.. If you don't have them, or weren't even around when they are were out, feel free to play the games in which ever edition you choose to do so. The narrative is the key! Don't have exactly the right figures, cannot field a full WYSIWYG army, don't worry. This is not a tournament. Proxies, replacements and even entirely non GW made figures etc are all fine. Scratch building is encouraged. The golden rule is to have Fun and play games with a story!!!

To encourage the use of the older systems, from time to time, specific factions will receive specific faction missions, objectives, characters and or units etc.
These will be entirely for the promotion of the story. Do not expect them to be points balanced in the slightest and do expect to play games where the sides will not be equal.. It is all about the story and having FUN!!!

If you want to play games using EPIC, Adeptus Titanicus, Inquisitor or Inq28 or Necromunda or Apocalypse then feel free to do so. Though I anticipate the majority will be 40k of one edition or another.

The Timeline: I haven't set the narrative in a set date for a simple reason. I want players to feel they can participate with what they have. HOWEVER the only exception is it is before the events of the gathering storm. So if you plan to use Primaris and 9th edition models, then please just use them knowing they will be representing their older counterparts.

The Games Master: That is me, John. I will be trying my best to coordinate the herd of cats that will be you the players around the globe wishing to take part. Yes you! :)
I am just an ordinary person with a day job and life and lead mountain of old 40k to get painted. So I will do my best to make this fun and full of frolics for all! But I cannot do it entirely alone and along the way I may seek or accept the offers of helps from some others. Especially those who are great with graphics and can  assist with old school style battle maps for mission briefs and campaign area maps.

I will utilise my 28mmHeaven blog to report upon, update and issue faction updates and orders (where I don't do so directly to players). So please check back periodically for updates.

The Games: I hope as the campaign progresses we can build a small community of like minded souls who share a love to narrative gaming and fancy helping to build the story of the campaign via the games they play. I hope we will gather new players as time passes and encourage those at clubs to rope in their friends and family where they can to share the fun!


Donations: I am not doing this to make any cash, however anyone wanting to contribute a few pennies towards it may do so and I would be most grateful indeed. It might also allow me to throw some cash to artists for maps etc. If you wish to do so click the donations above or here!

The Golden Rule! : Have Fun!!! Seriously.. this is entirely about having fun wargaming with miniatures and friends. Making and sharing experiences together. If you are unsure about a ruling, if you disagree with your opponent then just roll a dice, let them choose 1,2,3 or 4,5,6 and let fate decide who's view stands.

Good luck and may the fates of the galaxy support your cause!

Posted by Goose on the loose at Saturday, August 07, 2021 No comments:

3D Printing really has come along a way..

I remember back in 2016 chatting with someone who had built a home based 3d printer and event then the possibilities for wargaming were obvious.. but wow these things have really come a long way.

The designs and files out there are simple impressive.
This one for instance is quite something:
Ork looted Imperial Knight 3D Print 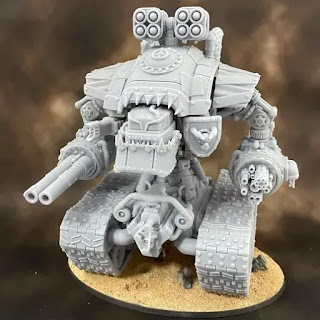 The resolution on modern resin printers is quite something. I wonder as the technology moves on, will we see printers at shows and simply selecting the model you want and having it printed there and then.. probably a decade or more away, but I can see that occuring..

So 2020 and much of 2021 have been a right battle and strife with the Covid Pandemic.
Here is the UK we have gotten ahead with the vaccines roll-out but the virus is still making a return for a third wave, but so far hospitalisations and deaths are low...

So my gaming club has moved venues on the whole.. our old venue closed, the hosting business built a new premises but moved us to a Wednesday night from our Thursday night slot and that kind of killed our numbers just a little. So we setup in a new venue on Thursday and sadly it was a distance away from our old and so we have lost a few but gained a few new players as well.. so yes.. a definite time of change.

So I have had a break from wargaming for a while.. Health reasons and other issues caught up with me. But now, I am back to regular hopefully as long as we don't get a lock down again.. gaming..

Rogue Trader 40k is back on the go.. and I have plans.. This blog will I hope see some more regular updates, and hopefully some of my followers will still be interested.

So hoping all and everyone is well and getting through the pandemic ok. And watch this space for updates!