Well tonight at the club, I watched a game of Warlord Games, new Boltaction Rule set being played.
A simple battle,, German SS force, of roughly a platoon with a tiger in support. Defending against a push through by a US infantry platoon and four shermans.. two 76mms and two other ordinary M4A  and a half track.

Now I didn't stop till the end. I was keen to see how it compared to playing Rules of Engagement by great escape games which is my first choice for 28mm WW2 games which this was.
(Sorry no photos).

Now the simple hits, gun classes etc all seemed perfectly straight forward, but the picking chits for each unit, out of bag, was well, to me, slowing the game down. It also seemed to break up any chance of allowing the actual use of ww2 coordinate infantry tactics and made it more luck than judgement for many things.

Now judging a rule set on just watching and not even playing the game is not a wise plan, and I always try and give a rule set three games before I make my mind up.. but I was dubious about Boltaction rules when I first read on line reviews and my sceptical nature has only grown toward it, now I have seen it played.

I won't draw final judgement till I play a game or get a rule book to read. I certainly won't be buying it, as I think Rules of Engagement has a far more historical feel and accuracy as far as any rule set can claim to be representative.
For now.. I wait to learn more and will post my findings as I go.

Posted by Goose on the loose at Thursday, January 24, 2013 No comments:

So the ice and snow lay deep upon the ground.. and someone rang me late on Saturday to ask if I was going.. hmmm up until this point, I had written off the idea.. but well.. nothing ventured, nothing gained. So off out on sat eve at 10pm to fuel up in the snow. Screen wash topped up, oil checked and spare water bottle in the car, in case the screen sprayers froze, as air temps were low.

So having agreed with two of my fellow club mates, a RV (no, not a car, sorry yanks) at a specific point for 8am.. meant getting up at 6.30am to extricate the car from the ice and snow and enough time for me to wake up. I was entertained by watching the prats in their 4x4 sliding everywhere attempting to get off the estate, and bemoaning the snow and ice, whilst I drove past in my 2x4 front wheel drive car, past them up the slope. The look on their faces was a worth the early start.

So club mates collected, off we went, headed for staffordshire.. the roads were not bad and we arrived for 9.30am despite the snow and found a parking spot in the snow by the church and headed inside, as the snow was starting to fall again.

The hall was a similar layout to last year. Many of the traders were the same with a few new faces.
The number of people was a bit of a surprise as I expected the weather to have put people off.

So, bacon sandwich then consumed and a cup of coffee with a random number of sugars in,, as three were ordered and no one knew which onyl had 1 sugar in..lol.

And then the buying began... (Warning! ! ! - Grumble to follow) well actually.. we joined the buying.. it had already been going on between traders and table sellers for a while before the table sale officially opened. OK I know it is difficult to stop and I guess a sale is a sale to people selling, but, it just makes me feel a tiny bit cheated when you arrive early and see this happening and then see the same items being put up for sale on a traders stand at an increased price.

Anyhow, grumbles this aside.. I snapped up two random boxes of 40K Epic.. which just about made the majority of a set between them and gave me (I found out later) a good orc starter army and the rule books and good bunch of scenery and a small Tyranid force, that I will probably sell on at another snow to recoup a bit of the cost. At £45 it was not a bad buy, not the best bargain I have ever had at a gaming table sale, but worth the trip down for what I got. Last year we came away with a greater number of buys. This year, we came away with less, but still found some between us.

So here are some shots of the fall. 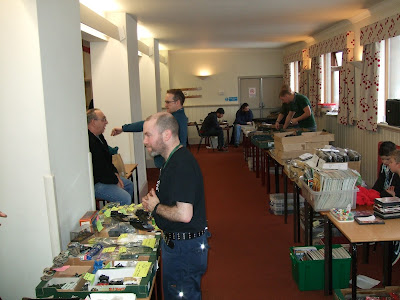 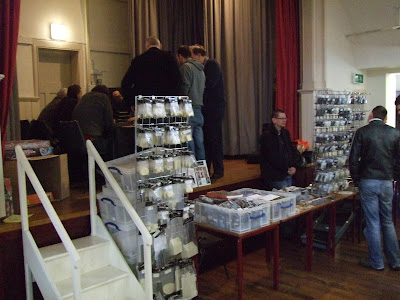 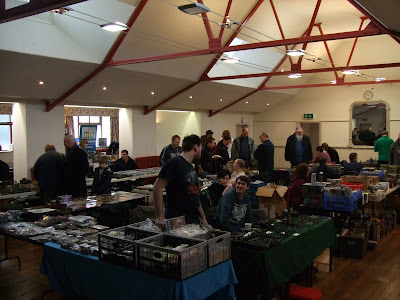 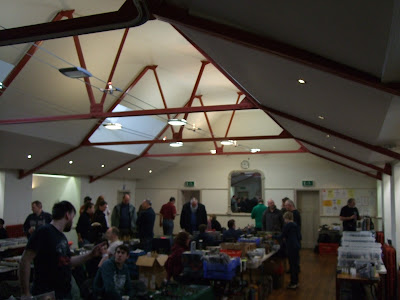 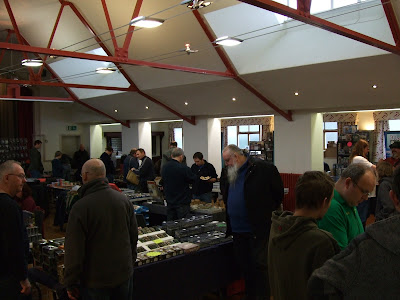 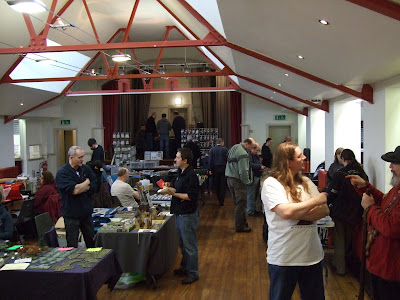 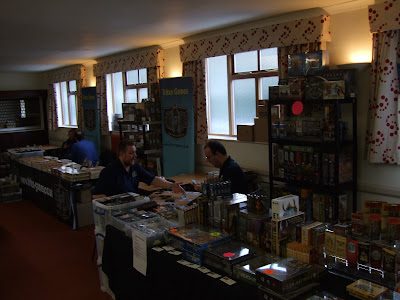 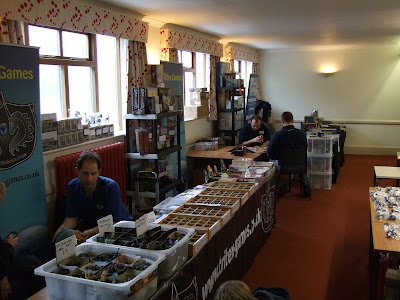 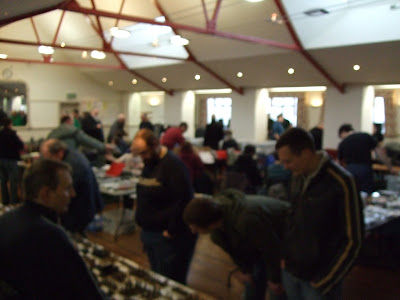 I picked up a couple of old Werewolf the Apocalypse Books for £1ea, which was nice. And a bag of 40k spare weapons and bits for £1.. toward the end.

As the snow was falling pretty heavily,, we decided at 1.00pm to head for home, and dashed back up the motorway then the A roads home, as the snow came down.

All in all not a bad day out. Weather could have been better. The venue is nice, easy to get too. Parking nearby is tricky with the church go-ers on a Sunday, but there is plenty more parking just up the road 100yards, if you cannot park on the immediate side roads.

The mix of traders is fairly usual,, though it would be nice to see a few more private sellers, as these are where you get to the interesting things and best bargains by far!

Since Paul from MAWS passed away sadly, and warboot's have stopped in Manchester and so, Penkridge is one of the few alternatives that remains. The timing in the year makes it a bit fun weather wise. And I personally wish it had a better ratio of private individual sellers, to traders, its been a good trip out each time we have been.

So we will be keeping an eye out this year to see if the Warboots in Manchester are held again in the future, whilst maybe considering holding our own table sale some time at the club.


So finally a big thanks to the organisers and if we can make it again in 2014..and its on.. hope to get there and see what other bargains can be found.