I have managed to get some more work done on the first batch of zombies.. the bases are now done, and more importantly the gore is added and they have had a wash.
So what do you think?
The gore was done with three colours of red.. a dark, a middle and a bright red. The burnt cadmium was the dark. Basic Red was the middle and the fresh blood was Game Colour blood. This latter is pretty bright and without a wash over the top, is too bright I think.

I started with burnt cadmium and covered lower edges of wounds and did some blood marks on clothing. I wanted them to look gory but not over done. I think making a figure look bloodied is an art. A lot of people get too heavy with the blood, and they forget dried blood looks almost black. For a first attempt, and with no previous work to go on, I am pretty happy with the look so far. 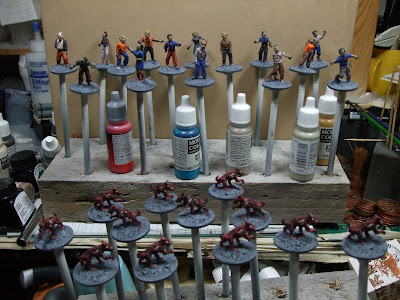 So you can see the group as a whole. The bases were done with my usual three tone system. A dark, a middle and a light. The dark base colour is bases on to completely cover the base. The middle tone goes on with a moderate dry brush. The lighter tine then goes on last with a light brybrush. I chose the grey, as usually I go with brown and I use Silfor Tufts to detail the bases. But I decided the grey worked well and as often these will be in a modern environment, (when I make the buildings, that is! ) I went with grey. Also I think I made do my hero's and survivors with brown bases. That was its easy to tell them apart. But time will tell. ﻿

As you can see I have done the zombie dog bases the same way. I could get some off white and pick out a few individual stones on the bases, to break them up a bit, but give the time and number (still over 100 zombies to go!) its a lot of work. I will see.

The final step will be a gloss coat of varnish as a protective layer. Maybe two coats. As I suspect these figures will get a lot of handling. Then a matt varnish over the top to get rid of the shine!

Note, the other advantage of doing a gloss layer followed by a matt layer, is as the matt varnish wears away, you will see you figures getting shiny. When that happens, its time for another coat of matt varnish. Before the varnish layer is completely worn away.

Warning - The following may come across a bit patronising!

A tip with varnish. Many people get a white milky look! And scream "nuts" or words to that effect and swear they are not varnishing their figures ever again..

There are a couple of reasons why this happens.;
1). Read the instructions, I don't mean just look at them, I mean follow them. If it says shake the can for 2-3minutes. It means it. Get a watch, and time it. Shake like hell. Your arm and wrist will ache! If they don't you haven't shaken the can enough! The propellant chemicals and adhesives chemicals will not be fully mixed. That means you get cloudy looking finish.

2). Peas - No not the green things you eat. Nearly every good quality can of undercoat, varnish or lacquer has a metal "pea" in the bottom. If the can has stood in the same place un moved for a long time. This gets stuck on the bottom of the can. You need to bang it to free it. This can take a serious clout. Be careful, don't hit it on or with anything sharp or the obvious will happen. But if you don't hear and feel that pea, rattle, then you will never get a proper mix of propellant and varnish. See note 1).  It can take several bangs and some serious hard ones to get the pea loose.

3). Atmospherics. Yes, atmospherics. what??? I hear you scream.. two things.. humidity and dust! Varnishes, don't react well to humidity, spray one in a damp atmosphere, the water vapour in the air sticks too and is trapped in the varnish as it settles on the figures. This gives you a cloudy finish! It also effects the life of the varnish.
Like wise with dust. The fine spray of particulate varnish, is electro statically charged as it turns into an aerosol, as it leaves the can. That charge, makes it attract dust. So try and make sure you spray and leave you figures to dry in a dust free place.  (This is the one thing I struggle with, majorly, its frustrating, but my extrator helps, and with the fumes).

4). Coats, No not 1970s Afghans with furry collars.. ;) I am talking applications and layers. Apply your first coat. Apply it in short bursts, don't apply it too heavy. Work with smooth sweeping motions, don't hover over a single target or you will over dose it! If the coat/layer is too thick! It will go cloudy and look horrid. Better to under - coat it, and apply several thin layers. BUT, ensure its dry between applications. If you put another layer over a curing layer, the chemical reaction of the base layer will effect the second upper coat. The volatiles in the lower layer won't beable to escape, and will effect the second layer!
That leads to a white milky look or can lead to bubbling in the varnish.

5). Too much Matt - Yep, matt varnish, when over applied, goes satin and can even go glossy. It doesn't take a lot of Matt varnish to kill the shine. So make sure you go lightly.
Putting Matt varnish over a gloss when the gloss is not fully dry is another cause of milkyness.

6). Stick to same brand - I personally rate the HMG varnish sold by Figures in Comfort and some other retailers. I like it. It works. I use both the Matt and the Gloss. However if you are tempted to mix manufacturers, heed the following. Different makers, use different combinations and cocktails of chemicals and putting one over another may lead to a variety of issues. Firstly, none setting. Secondly milkyness. Thirdaly peeling in extreme cases. And some cheap chinese varnishes use some pretty horrendous banned chemicals that can react and catch fire, according to an artical in a train magazine, a friend of mine told me about.

So, you are now fully aware, well at least aware of some of the issues that I know of or have come across with varnishes!

Ok, in all scineretly I hope the above is handy and informative!  Despite all that above, it is very much worth varnishing your figures. They will last a lot longer. And there is nothing worse than half way through a game, reaching for a figure, only to notice a chip in your fabulous paint job, which just spoils the enjoyment of the game!

So, anyhow.. that 20 something zombie dogs and 15 human zombies done! (with exception of varnish). To save on varnish I will do them in batches and so these first sets of figures will get put aside and I have to wait for a dry none rainy (humidity) day.

Only kidding! My club mates are busily amassing some serious volume of 15mm scifi, from various sources and had a great looking game last week at the club. It looked really good. And yes I would be tempted if I hadn't already got a mass of stuff and my current projects on the go!

So, the next step is to de-mount the figures from the 6" nails they are on and look to getting the next lot mounted and undercoated.

Hope you like the look of the ones above. And I will keep you update with the progress of the next lot. I need to get a few more "ordinary, colours". My paint collections are pretty military in nature and I need a few more shades of colours and ideas, before I wind up with too much of one colour in the horde.

Not I have the gore and bases colours sorted out, I hope I can crack on with them.

Please stay tuned for the next update.
Posted by Goose on the loose at Saturday, January 21, 2012 4 comments:

Hi Folks, Apologies for the lack of updates recently. Life has hit the hetic button once again.
I have however been able to get some painting done on the zombies, batch 1. And they are looking quite good, if I do say so my self. I will try and get some photos up and a full update shortly.

I have also been looking into more storage options for figures. The perenial problem of an expanding lead mountain.. where to put it all!

As an aside and remember I said I wasn't starting any more projects.. well.. err.. it kind of got started last year mind. But I am looking at a fantasy skirmish campaign to run at the club.

I think I have narrowed my idea down to Middle Earth, the 4th age. 500years after the end of the war of the ring or so.. may be a bit longer. Why? Well it means I can write some new stuff, inspired by my MERP info and yet still keep the players familiar with much of the general geography and peoples, without too much change.

Oh and I have been playing with gore! Its actually harder than I thought to make a zombie look good. Seriously.. the drawn, gaunt, mindless expression, are great. But simple paint jobs, lead to simple looks. So to give my victims, sorry zombies some, impact, I experimented with gore.. three tone red combination has kind of worked well. The end result is ok. I would like to say it is awsome, but I just don't know.. I will leave that to you guys to decide once the photos are up.

Anyhow, thats it for now. Just a quick update. More to following shortly.
Posted by Goose on the loose at Tuesday, January 17, 2012 No comments: